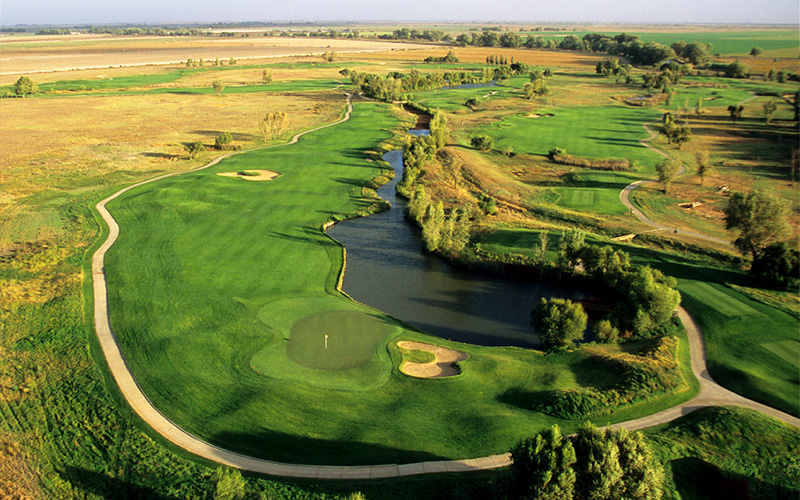 The property containing this unique golf site is owned by the Kelley Family and is held in their James A. Stevinson Corporation that was established in 1852. Stevinson Corporation is a diversified agribusiness that some seven generations later has morphed into farming, dairy production, beef cattle, almonds, and forage feed on 13,000+ acres in Central California valley.

However, the 600+ acres designated for the golf course property has remained  undisturbed for years because the high water table and marshy lowlands rendered it unsuitable for the agricultural business.  This was a result of its close proximity to the confluence of the Merced and San Joaquin Rivers that both have headwaters in the Sierra Mountains.

But conversely, it was George Kelley who identified this location as an ideal site to construct “a traditional links” designed golf course reminiscent of the links-style courses he played while competing professionally in Ireland and Scotland.

It was also George Kelley and his undying pursuit for exceptionable links-style golf that found the perfect partner in 1992 in Bob Lurie, the San Francisco Bay area real estate magnate, philanthropist and former owner of the San Francisco MLB Giants that had an equal devotion to the game of golf.  Interestingly, it was Bob Lurie who previously recognized a once in a lifetime opportunity in the early 1960’s becoming an investor and founding member in Pebble Beach Pines Golf Club on the Monterey Peninsula, which later became known as Spyglass Hill.

George and Bob agreed that John Harbottle, the young and impressive golf architect from Tacoma, WA and protégé of Pete Dye, would philosophically be of a like mind and bring his devotion of Thomas, McKenzie, Ross, Hunter and Simpson with him to direct the creation of their “dream golf.”

OB Sports Golf Management, under the leadership of Orrin Vincent and Bob Marshall had recently completed and opened a John Harbottle-Peter Jacobsen project in Northern Nevada entitled Genoa Lakes and George and Bob felt confident in keeping that same combination together and betrothed in their project.  Thus, Ed Francese, the President of OB Sports assumed the responsibility in early 1994 to coordinate the construction process with Wadsworth Construction Company, oversee and direct the schedule and budget while reporting weekly and monthly to George Kelley and Bob Lurie.  OB Sports was also contractually engaged in a five year management agreement about the same time and began to gradually identify, assemble and bring on board the key employees and staff members, as their services became necessary during the grow-in, turf maturity and pre-opening phases of the new facility.   The first and most important key employee was Bill Campbell as the golf course superintendent.  Bill was the perfect fit because of his construction expertise and previous successful tenures at Sahalee CC, Incline Village and Edgewood Tahoe.  After the initial opening, Bill’s importance continued to grow because of the consistent “tournament turf conditions” he would display contributing to Stevinson’s notoriety in gaining prominence in the regional tournament golf scene. 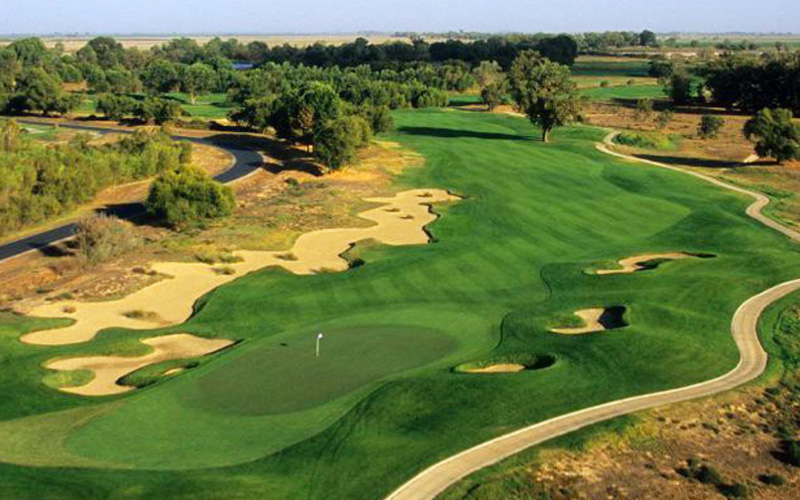 Stevinson Ranch began receiving praise and accolades the day it opened in 1995.  The Harbottle-Kelley design was playable and enjoyable for golfers of all abilities and truly reflected the character, charm and charisma of an older golf course in the British Isles.  George Kelley unquestionably was the face of Stevinson……he had a daily presence, consistently displaying his tremendous pride of ownership and was genuinely involved in the marketing and promotion of the facility from day one.  Ed Francese and OB Sports remained involved as the management company overseeing all aspects of the daily operations of a staff of 60+ employees until the conclusion of the five year agreement and gladly stayed an additional year in 2000 which served as the transition period during which time the Kelley and Lurie partnership assumed the operational responsibilities in early 2001.

During the first five years of operations the facility matured in many different aspects.  The turf and agronomic progress was simply outstanding.  Stevinson’s Crenshaw bent grass putting surfaces and distinctive green surrounds presented the highest quality of turf anywhere in the West, private or public facilities.

Kelley and Lurie also made a further commitment by building a unique cottage community of twenty plus individual rental units including a private clubhouse and swimming pool recreational area along the front entrance of the property.  This enticed and enabled golfers from all over California to “stay on property” and enjoy a multiple days and rounds of golf at Stevinson.

Another goal of George Kelley and his brothers Kevin and Bob was to gain Signature Status in the Audubon International Program.  And Stevinson proudly became the fourth golf club in the world to achieve such status.  The Kelley-Lurie partnership built extensive nature trails and viewing areas throughout the rich marshy lowlands and went “beyond Audubon compliance” instilling stewardship practices and sustainability of protecting their native and natural resources.   Many a golfer and several non-golfers enjoyed numerous hours walking and observing 120+ different species of birds as well as all other animals and creatures that call the backwaters of active rivers their home.

Stevinson also became a notable home for tournament and competitive golf events.  Stevinson was a host site for PGATour and Web.com Tour qualifying’s, USGA local, regional and national qualifying’s, NCGA team and individual tournaments each and every year, host site of University of Colorado’s annual invitational collegiate tournament, as well as being the home course for the nearby colleges and high schools.

And Golf Week Magazine consistently ranked Stevinson within the Top 25 of all courses in California year after year in the early 2000’s.  This is especially impressive once you consider the many outstanding private and resort facilities that exist in San Diego, Los Angeles, Palm Springs, Monterey Peninsula and the San Francisco Bay area.  Stevinson was undeniably “the jewel in the central valley” as appropriately labeled by the Bay Area media in the early years!

The Northern California golfing public expressed genuine sadness upon learning the ongoing drought in California exerted such tremendous pressure that the Kelley family decided in 2015 to close the golf course and use the allocated groundwater the golf consumed in their Almond production and dairy farming.